There is a road not far to the north of Swansea that traverses Mynydd y Gwair which follows an ancient route from Llangyfelach to the Amman Valley. The section of the road in my photo below I believe is referred to as "The Golden Mile". Just out of shot to the right is a small lay-by where on a clear day you can see the Black Mountain to the north-east and the Brecon Beacons and Fan Gyhirych to the east.

To the right of where the road disappears on the distant horizon are the remains of a castle. The castle marked the boundary between the Cantrefs of Gwyr and Mawr. The views in this last wilderness area of the county of Swansea are stunning and will soon be ruined with yet another wind farm to be built on the land you see in the photo below. But wind farms are not the subject of this blog but I would like to take issue with that matter in a future blog. 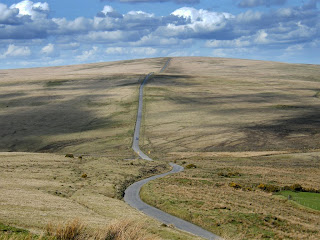 I have for quite some time lived in hope of seeing the Northern Lights ( Aurora Borealis), and am aware that on rare occasions they can be seen as far south as Swansea. So, many years ago I subscribed to an aurora alert whereby when there are the right conditions with regards to solar activity, I am notified by email when there is a chance of seeing the Northern Lights this far south. Over the years I have received a number of alerts but frustratingly this part of the world was under a blanket of cloud for most of these and thus making it impossible to see the aurora. Had there been clear skies then the aurora would have been visible as there were confirmed sightings further south than our latitude in places such as Slovakia and the south of Germany.

One day in  August of 2010, I received a " RED" alert and the conditions were not ideal but favourable that night. The moon was not rising till after midnight and there would be scattered clouds. So, for the best chance of seeing the aurora then you need to get away from light pollution and Mynydd y Gwair is the ideal spot and closest to Swansea where I live.

Being summer it was not going to get dark until after 10 pm so I headed up shortly after 10pm calling into my sisters house in Llangyfelach on the way. I told her there was a possibility of seeing the aurora later in the evening and that in the unlikely event that I would be fortunate to see the lights I would ring her. I set off from my sisters house around 11 pm armed with a flask of coffee and headed for the lay by on the above road. As I was driving over the highest point of Mynydd y Gwair I became aware of a greenish hue to the sky ahead of me in a north easterly direction. I immediately stopped the car and switched the headlights off. What I saw was the aurora......... or was it ???? There was a definite green hue, that same green colour that I had seen in so many documentaries and photos about the aurora ,but this was different. The green light seemed to be reflecting off some large cloud but there was nothing below that could have generated that kind of light and certainly not that colour. This was not a curtain of green light that one would usually see as with the photo to the right. 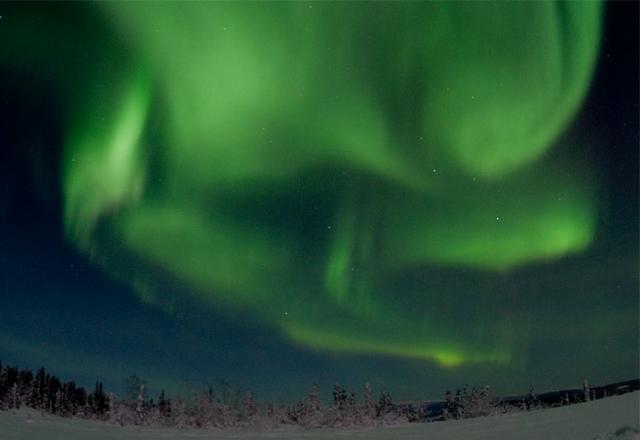 At that moment, I was certain I must have been witnessing the aurora and decided to telephone my sister as I had promised. In the total darkness I could not find my mobile phone on the passenger seat so switched the car interior light on. I made a quick phone call to my sister and when I switched the interior light back off the green hue had gone and I was in total darkness. I had read enough about the aurora to know that its appearances can sometimes be brief and intermittent and it could very well make further appearances. So, I decided to drive on further to the lay by just before the start of the Golden Mile. I pulled into the lay by, switched the engine and head lights off and sat there in a eerie darkness . Away from the urban light pollution and without a moon, the Milky Way was clearly visibly. The night sky was awash with so many stars that you just do not see when living in a city albeit there were some clouds to mask parts of the sky. I sat there patiently gazing towards the north and after some time had passed something unusual caught my attention. I was there in total and complete darkness but slightly to the left of where I had been focusing my attention I became aware that I could clearly see the Golden Mile section of the mountain road as it was glowing a faint dull green luminous colour. That same green luminous colour you find on bedside alarm clocks and the same green colour you associate with the aurora. What on earth was I witnessing? What was causing the road to glow green? I sat there for a little over an hour and watched the crescent of the moon rise in the sky to the east some time after midnight. The green hue did not reappear in the sky above me but the road stretching a mile ahead of me remained a dull luminous green. I decided to call it a day, or to be more exact a night, and headed off home.
The following day , and for some days after, I spent numerous hours on the internet looking for some explanation of what I had witnessed. Was the luminous green glowing road a reaction to the Aurora Borealis?? If it was , then I really did see the Northern Lights if all too briefly . I could find no answers though to my question despite visiting numerous web sites and forums related to the Northern Lights. I even posted the question on the AuroraWatch UK group on Flickr. If anybody is reading this and would like to see some stunning photos taken of the Aurora in the UK then visit the group by using the following link :
http://www.flickr.com/groups/aurorawatch/pool/  You will find my post on their discussion forum which I posted in September 2011. I had some replies but nothing that could explain what I saw and I have not found any other account of tarmac roads reacting to the Aurora Borealis .
I have been waiting for another opportunity to go up to the same spot and although there was intense solar activity earlier this year, Swansea on each occasion was under a veil of cloud. All very frustrating because on each occasion  again the Aurora was witnessed further south than the latitude that Swansea sits on.

Whilst waiting for intense solar activity and clear skies, I live in hope of a decent hot summer. Something which we have not had here now for 5 years at least. I mention this because another natural phenomena which is slightly similar to the Aurora is something you find in the sea and not the sky. I have been fortunate to have witnessed this on a number of occasions and surprisingly very few people are aware of it. I am referring to what I believe is referred to as bioluminescence but what myself and friends called sea phosphorous. I first witnessed the spectacle as a teenager whilst camping on the Gower down at Llangennith. One balmy evening myself and some friends decided to go night fishing and as we came out of the sand dunes onto the beach we were greeted by the sight of breaking waves being illuminated the whole length of the bay stretching for 3 miles or more. The photo below gives you an idea of what we witnessed. 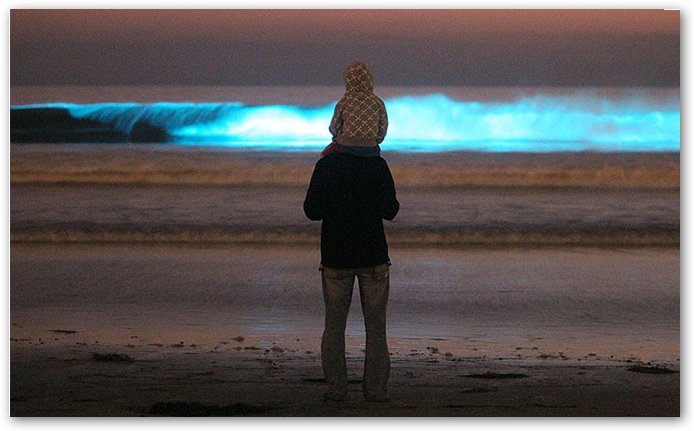 The waves that night were bigger breakers than depicted in the photo above so imagine how they looked stretching for miles. The following photo gives you an idea except that in the following photo the waves are very small as you would find in Swansea Bay.

Another hot summer when I was a teenager , myself and some friends spent a week in a caravan down Oxwich on the Gower. We decided to go for a midnight swim as the weather was so balmy. Oxwich being sheltered, you dont get the big Atlantic breakers as you do down Llangennith but we had great fun swimming in this phenomena. The photo below gives you an idea of what we experienced. 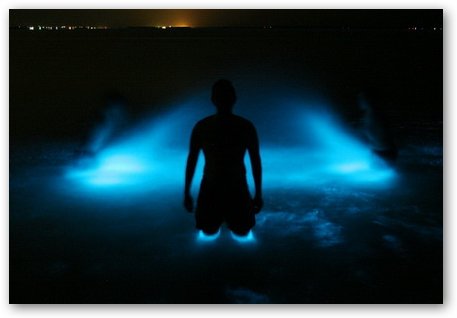 I do not know what will come first, a hot balmy summer or clear skies and intense solar activity.﻿ As far as a hot balmy summer is concerned then I think we are more likely to witness the second coming of Jesus but we can live in hope. If either come then expect to see me parked up in a lay by on Mynydd y Gwair or walking along a beach late at night. If you have not been on the mountain road from Swansea to Ammanford then take a trip up there. It is surprising how few people in Swansea have been up there and there are some stunning views which will be ruined with the proposed wind farm on Mynydd y Gwair. Much to my horror they have completed the wind farm on nearby Betws mountain and those turbines are visible from Cockett in Swansea.
Below are some photos taken from Mynydd y Gwair and nearby, including some taken from that lay by. 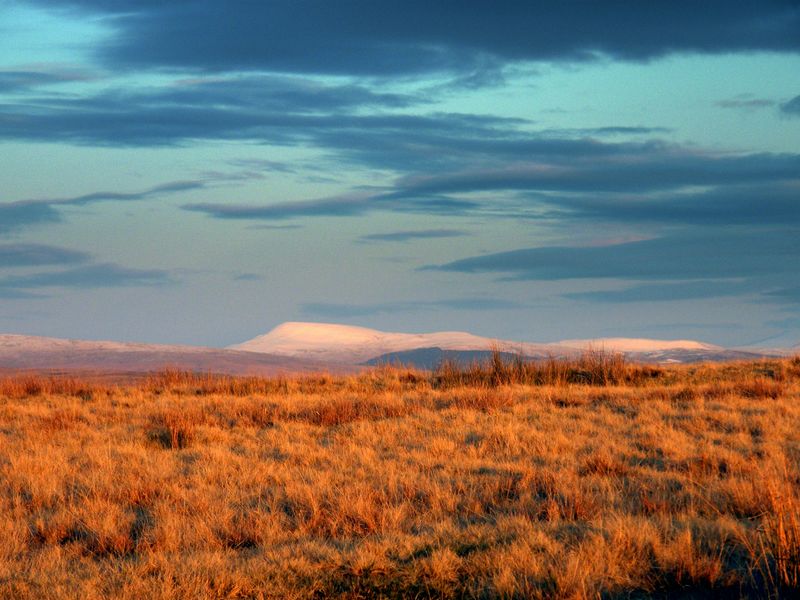 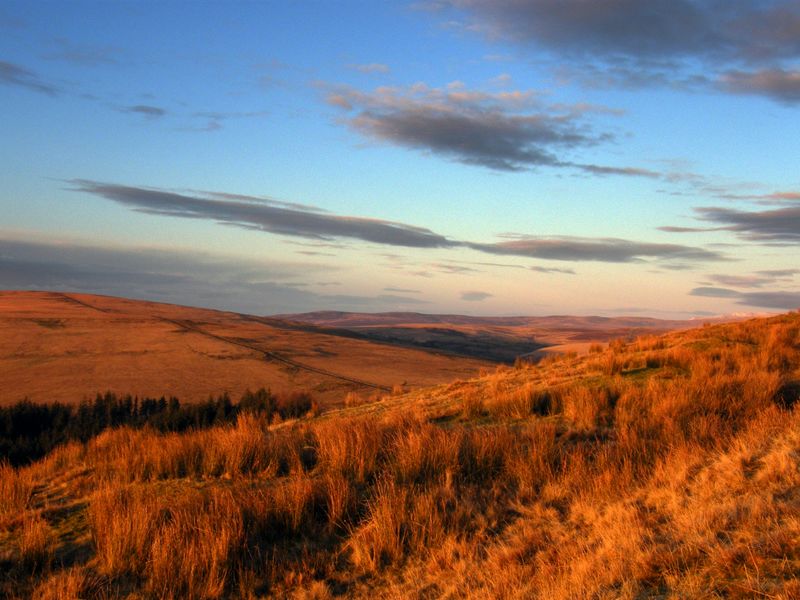 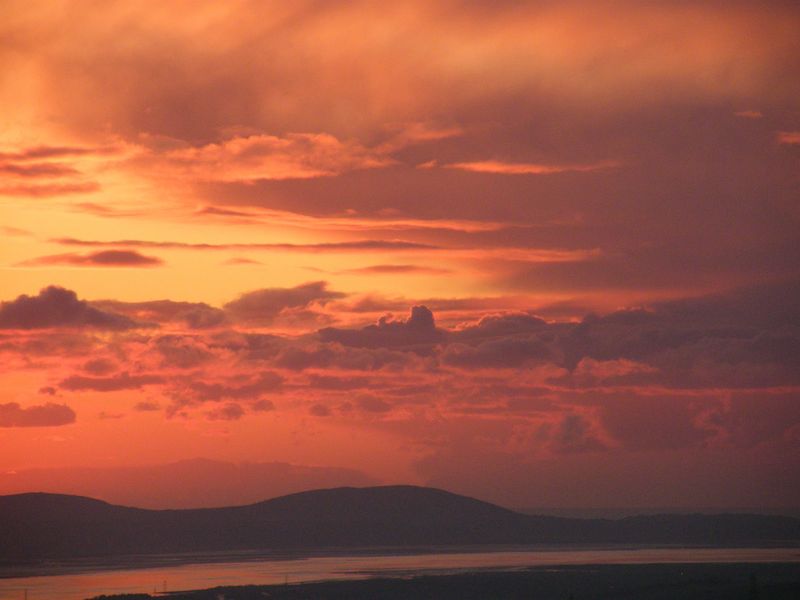 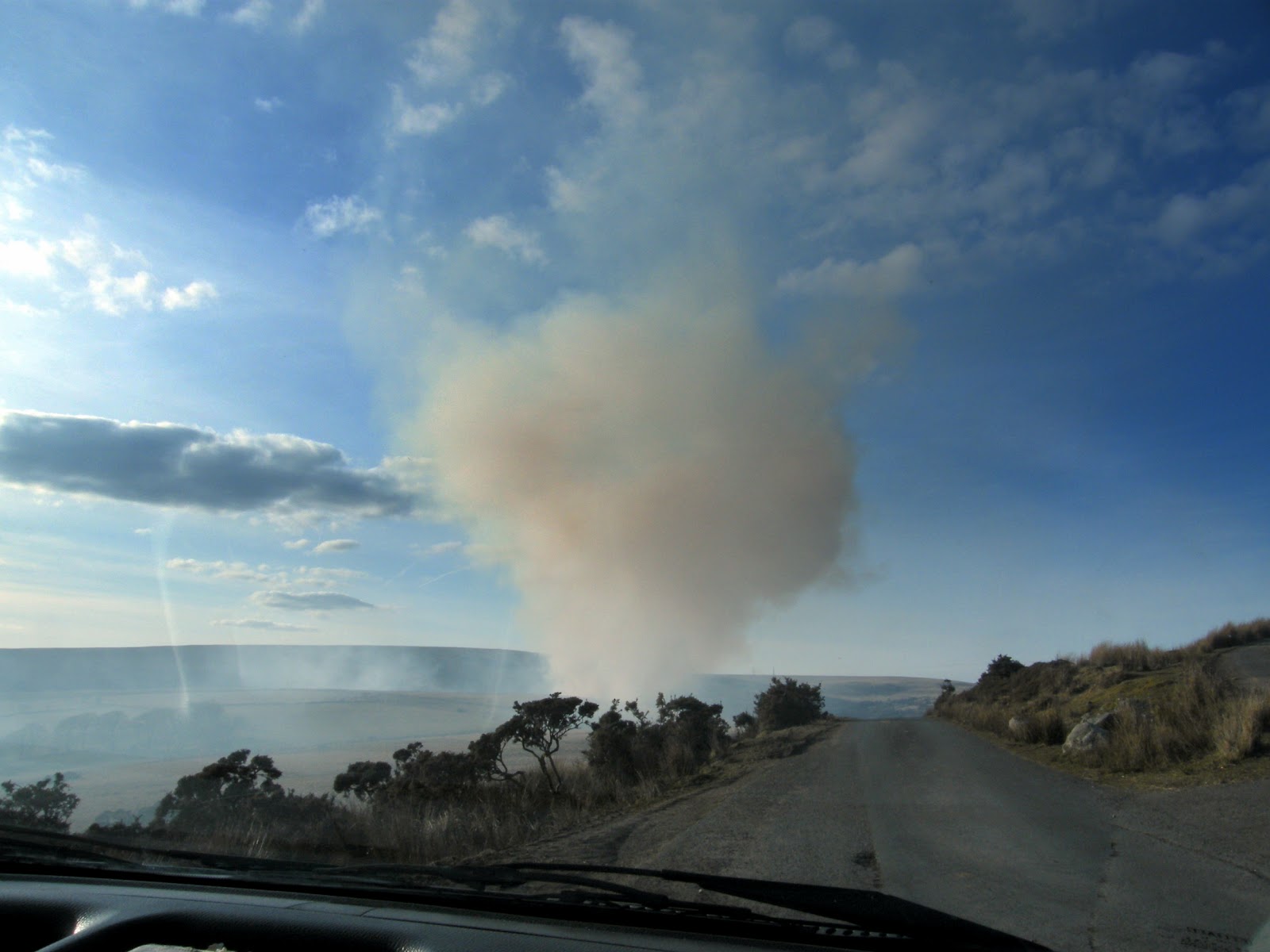 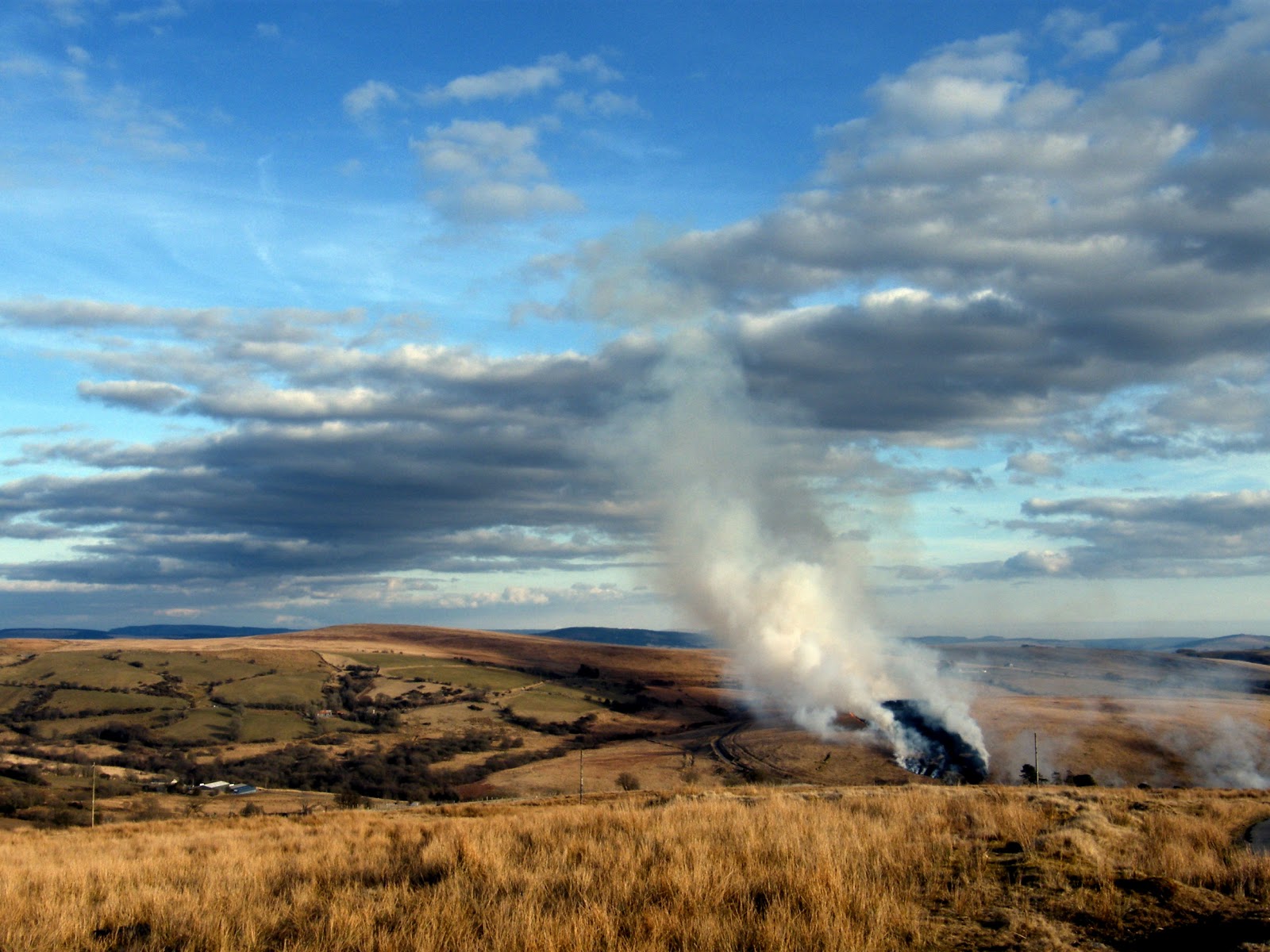 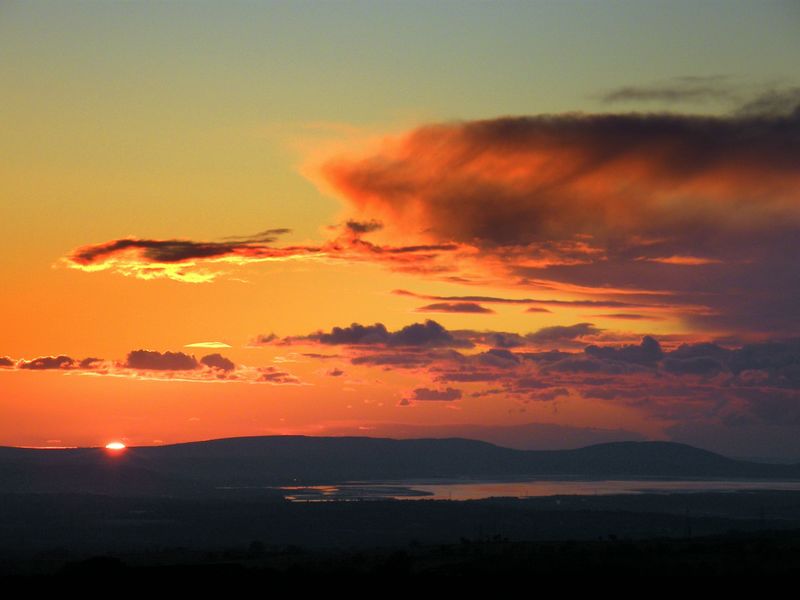 Below is a recent photo taken from the lay by where I have zoomed in showing a section of the Golden Mile and the heads of the wind turbines recently erected on the adjacent Bettws Mountain. 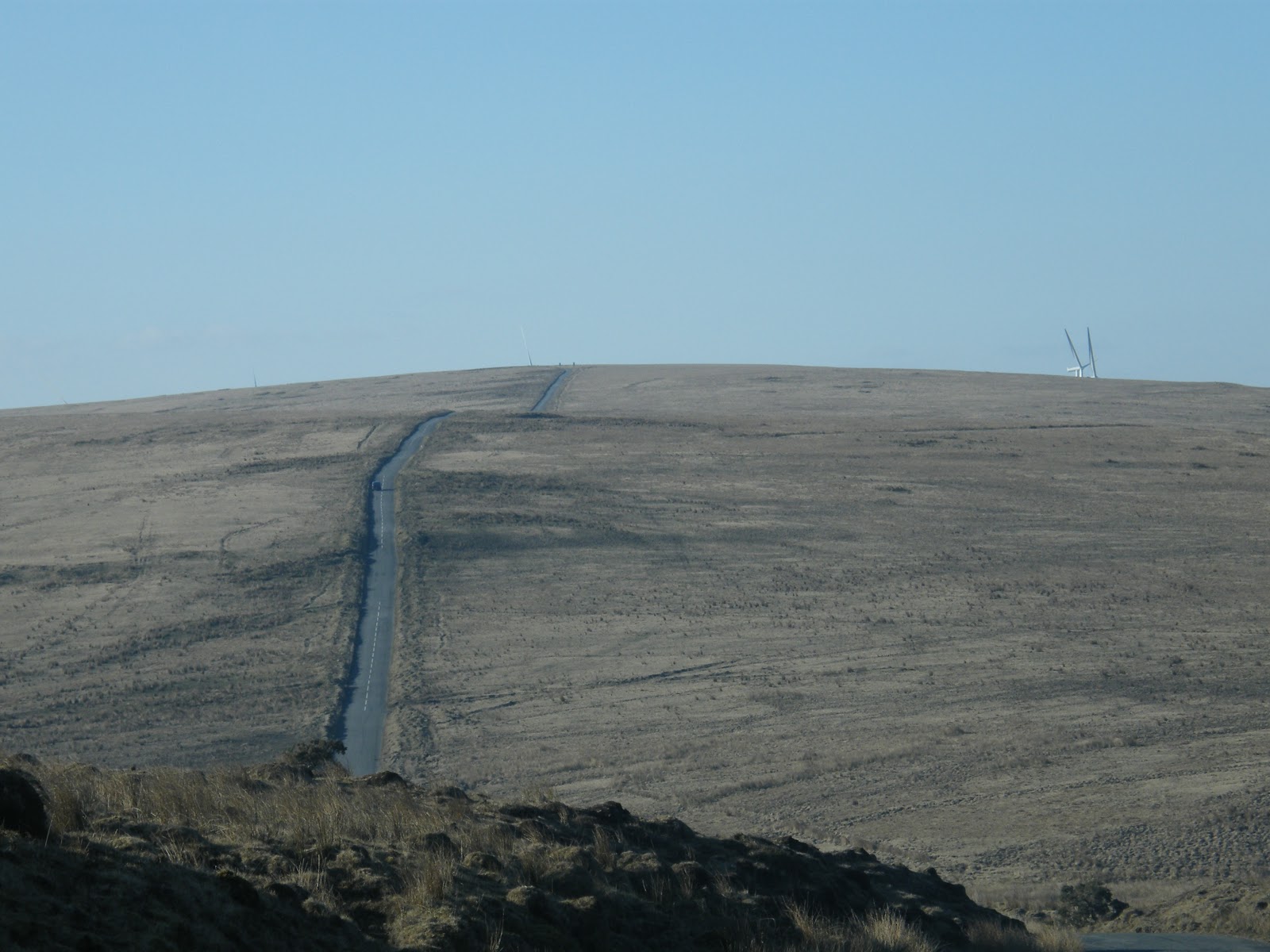 Below is  where the Golden Mile ends and you descend down onto the next section of the mountain road which takes you over Bettws mountain. 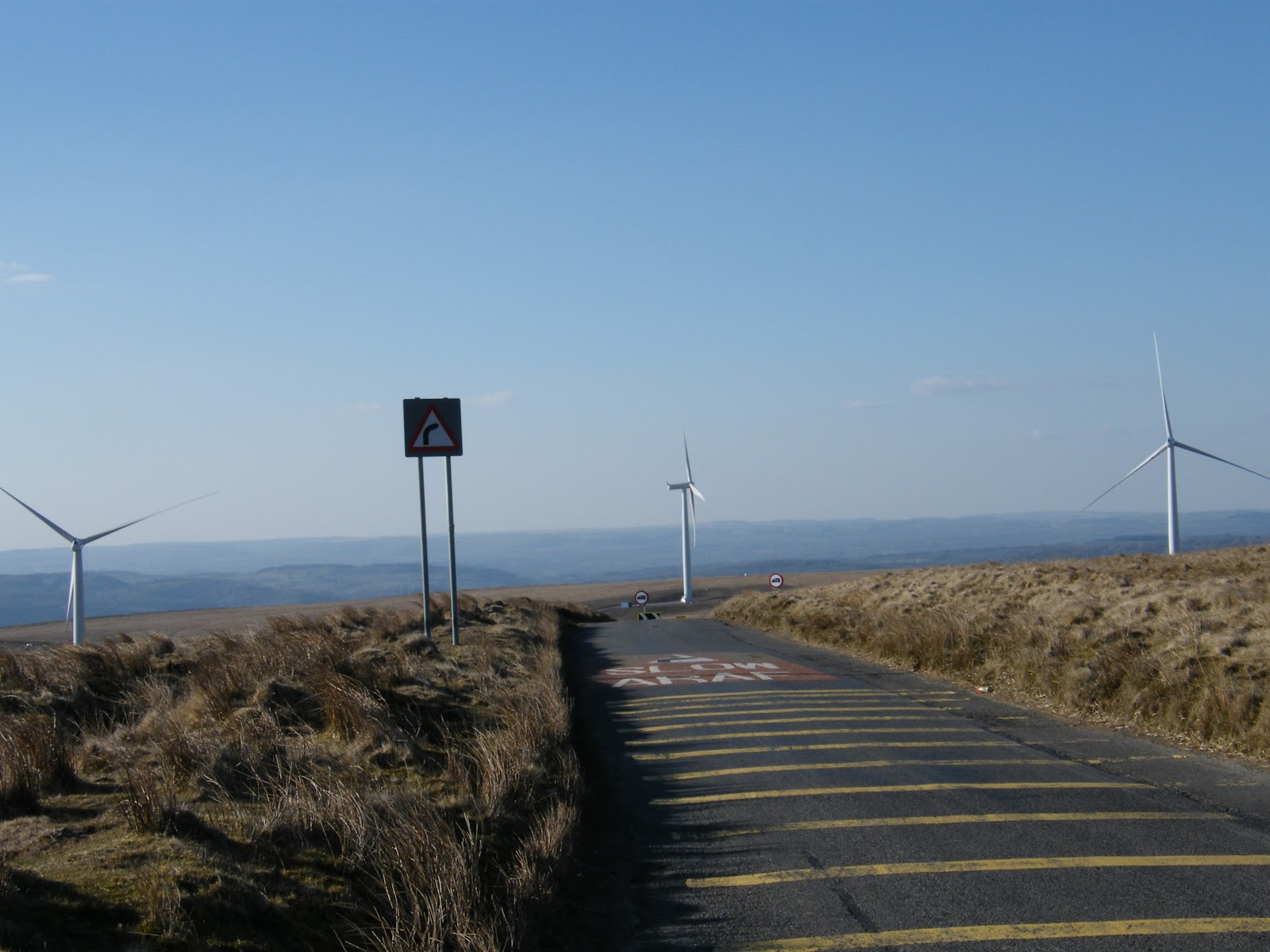 And this is what greets you further on : 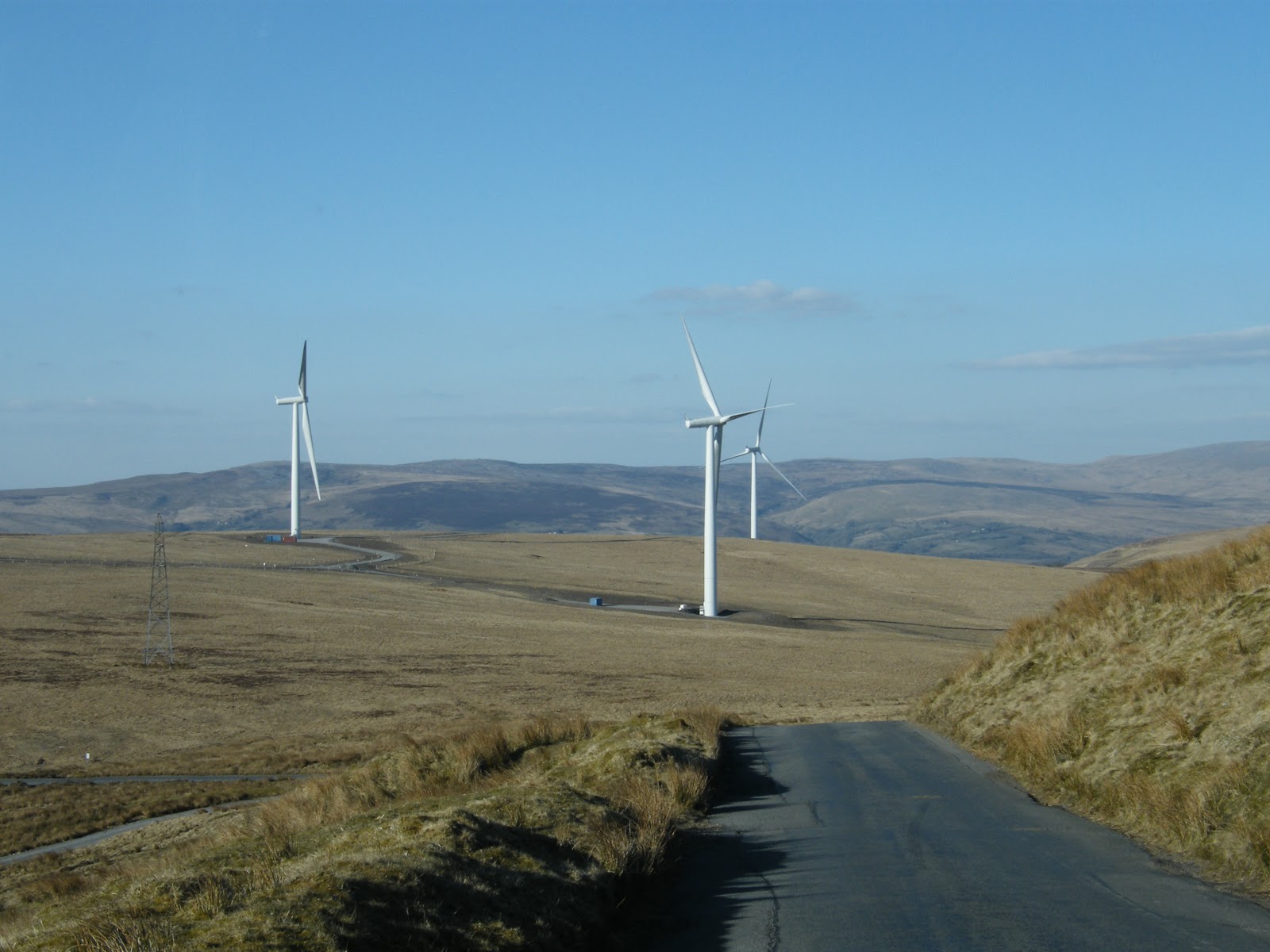 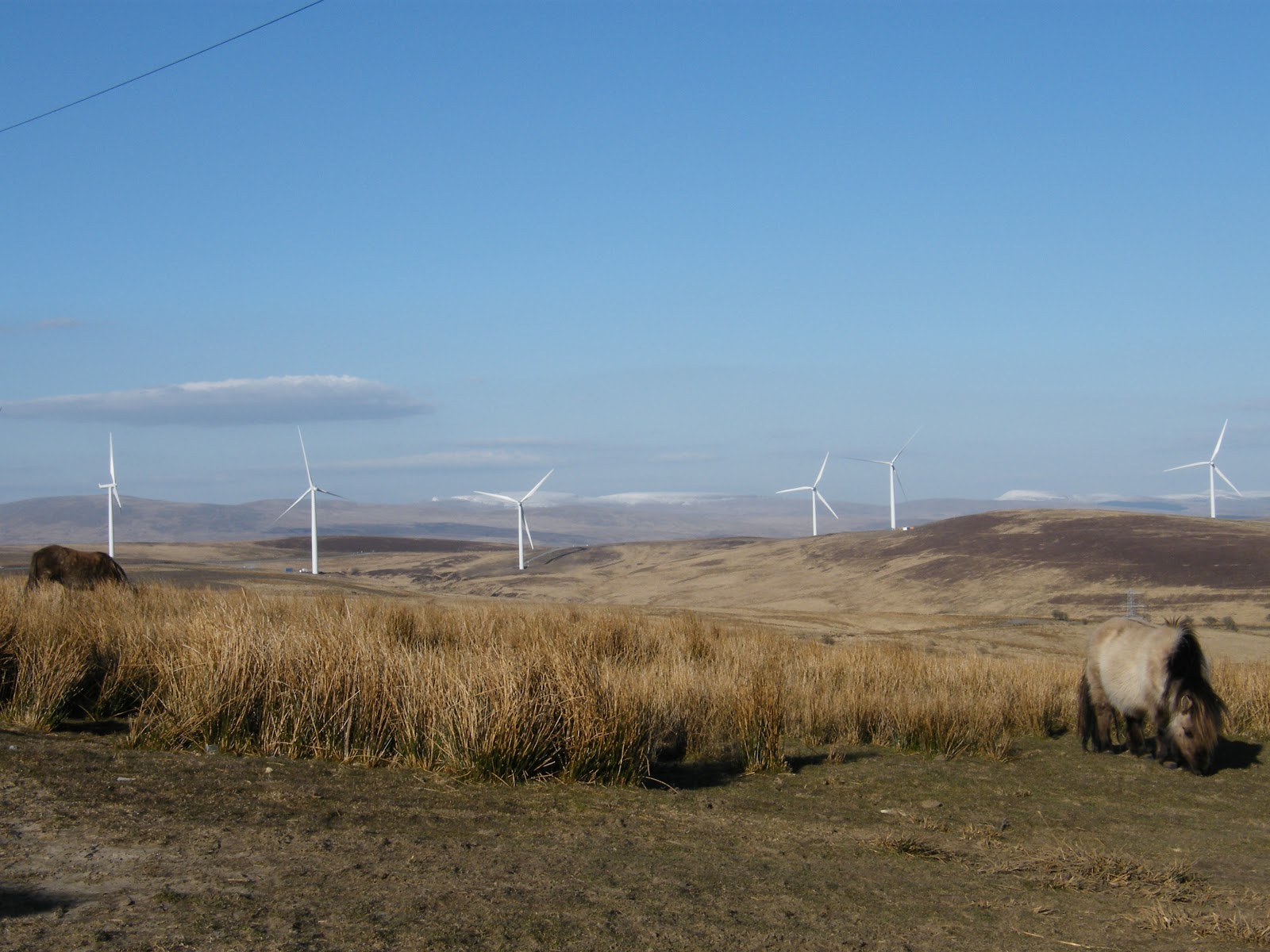 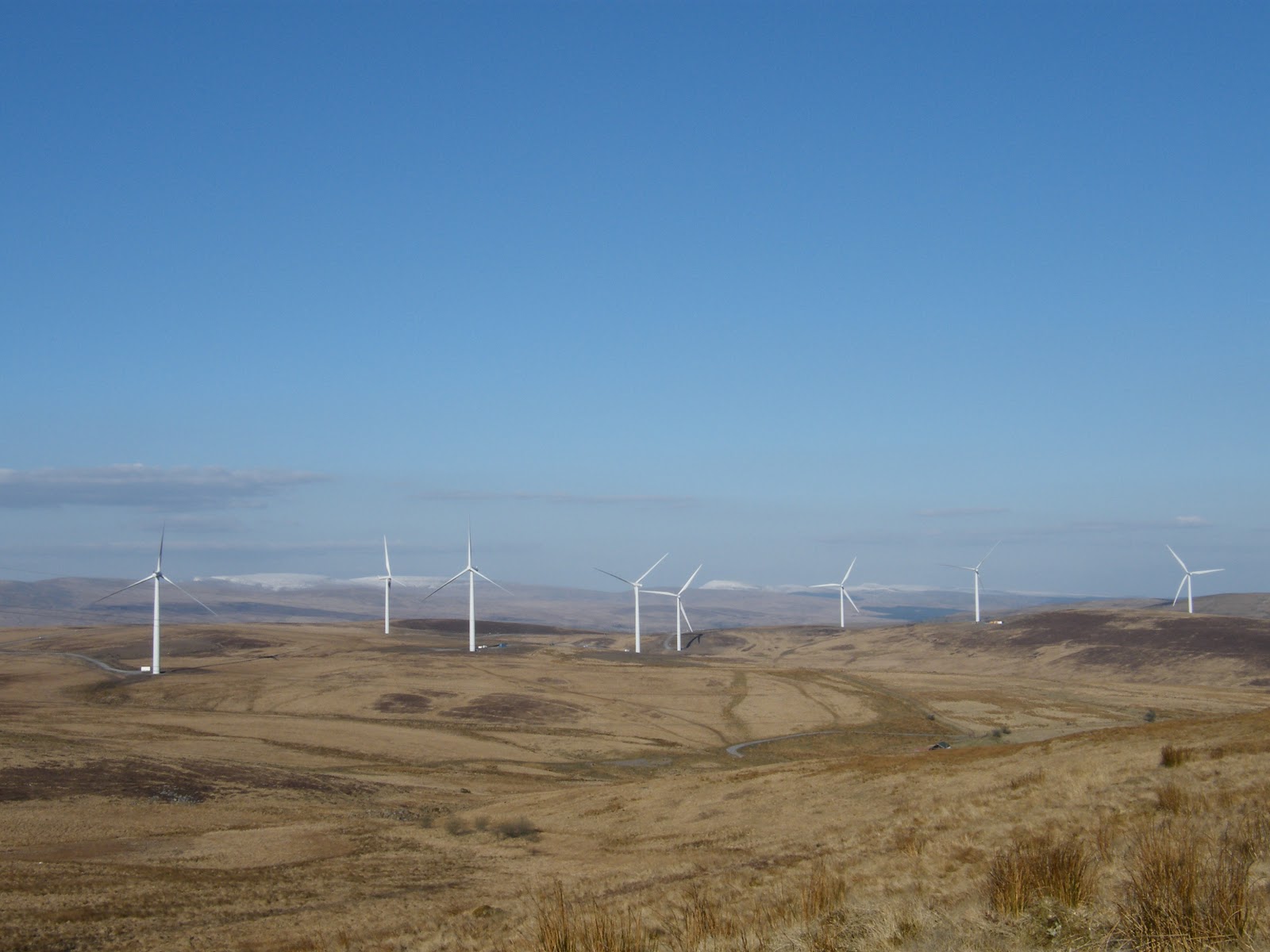 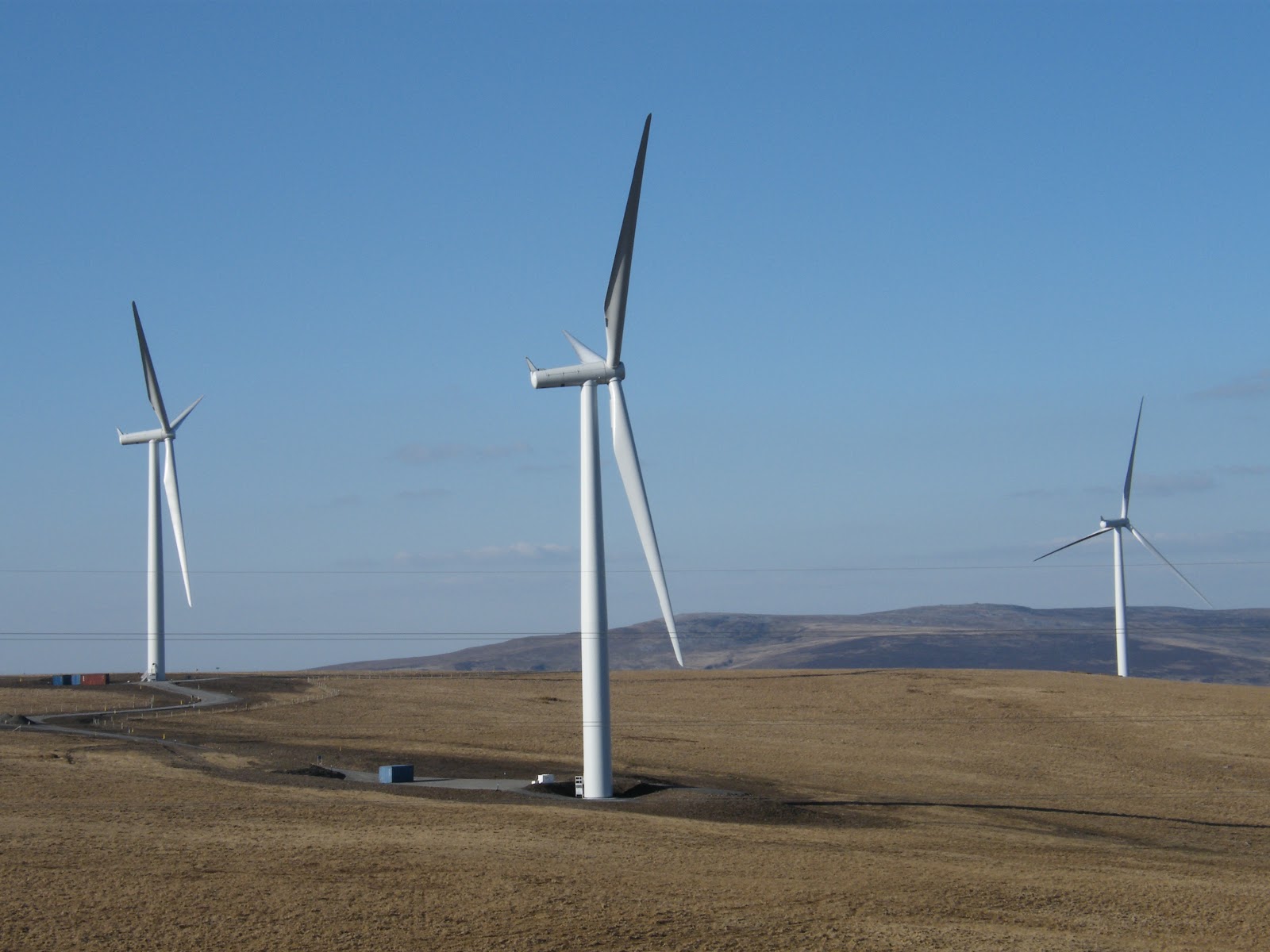 Posted by Stifyn Abertawe at 17:58